Chloride Spotlight: What is Sodium Chloride?

Sodium chloride is one of the most common minerals on Earth. It is the powerhouse behind the salinity of our oceans, the electrical currents in our body, the fluid in and around our cells, and the flavor in our food. Here we will further explore sodium chloride, its chemical and physical properties, and specifically its road deicing uses.

Chloride Spotlight: What is Sodium Chloride?

In both liquid and solid form, sodium chloride is an extremely versatile substance.

Sodium chloride is probably most widely recognized as traditional white table salt and is the go to mineral compound for flavoring everything from sweet to savory. It is an essential ingredient for pickling, brining, and fermenting a wide number of food items. Sodium chloride is also a natural emulsifier that helps liquids mix together without separating. This makes it the perfect ingredient for anything containing oil and water.

For thousands of years (before refrigeration) sodium chloride was the primary ingredient used to prevent foods from spoiling. As a preservative, it is especially adept at binding to water molecules and making those molecules unavailable for microbe growth. (This ability is also important when it comes to deicing, see below).

Sodium chloride is an extremely ubiquitous compound in our bodies; it is literally everywhere. It helps power the electrical impulses in our nerves and muscles (including our heart), balances water levels in and out of our cells, maintains blood pressure, etc.

A liquid solution of sodium chloride (saline) is used in many different medical procedures, such as cleaning wounds, flushing IV lines, treating dehydration, and more.

Sodium chloride is used in many industrial tasks such as ceramic glazing, hide tanning, dyeing, and rubber/glass/paper/plastic manufacturing. It is an essential ingredient in many industrial chemicals like fire retardants, detergents, drilling fluids, sodium bicarbonate (baking soda), hydrochloric acid, etc.

As a chloride salt, sodium chloride naturally interferes with water’s ability to freeze and lower its freezing point. Without interference, water freezes at 32° F / 0° C. Sodium chloride can lower that point to about 15° F / -9° C in a practical, real world setting. In a controlled lab setting, sodium chloride can lower this point even further to -6° F / -21° C (its eutectic temperature). It is sometimes applied as a liquid anti-icing brine before a storm hits to prevent ice from bonding to the pavement. It is also used in granular deicers after snow and ice have accumulated. 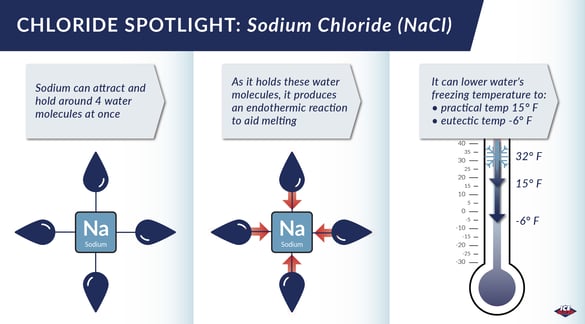 Sodium can attract and bind about 4 water molecules at once and prevent them from rebonding with each other. This ion hydration process interferes with the water molecules’ ability to refreeze. Sodium chloride also produces an endothermic reaction, drawing heat in from its environment to aid in the ice melting process.

Ice Slicer®  is a proud  complex chloride™ deicer product. Harvested directly from a Jurassic Era sea mineral deposit, Ice Slicer ® naturally contains a homogenous blend of all 4 chloride salts (sodium, magnesium, potassium, calcium) and over 60 trace minerals. These complex chlorides work together using a phenomenon called chemical synergism. As each chloride salt works, they amplify each other’s performance at all temperatures and in all weather conditions. 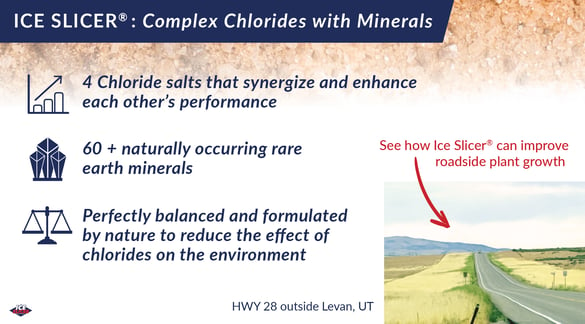 When applied in the recommended rates, Ice Slicer ® nourishes the soil and actually improves roadside plant growth! In addition, the extra minerals in Ice Slicer ® naturally buffer the effects of chlorides on concrete and metal infrastructure as well as the environment.

Are you worried about heavy handed applications of chlorides on our infrastructure and environment? Well, responsible deicer usage is a goal we can all get behind. Try Ice Slicer’s ® nature balanced formula and enjoy both high performance and environmental peace of mind.