The Cost of Closed Roads

As a nation with very diverse weather patterns, our relationship with winter has been a messy love affair. We adore the idyllic scenes created by blankets of snowflakes, but bristle at the burdensome interruption it creates in our daily lives. Centuries of hard winters have taught us how dangerous and costly snowy shutdowns can be. However, we have also learned the value of innovative measures that can be taken before, during, and after winter storms hit. Here, we will explore the wide ranging effects of winter road closures on our nation. 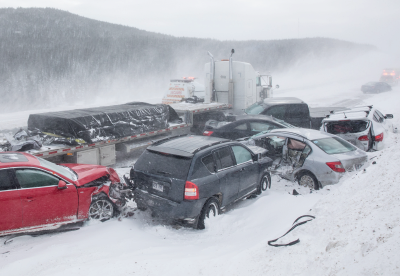 The Cost of Closed Roads

When Snow Brought History to a Standstill

According to Farmer’s Almanac and The National Snow & Ice Data Center, there have been many epic snowstorms that have immobilized American cities over the past couple centuries. 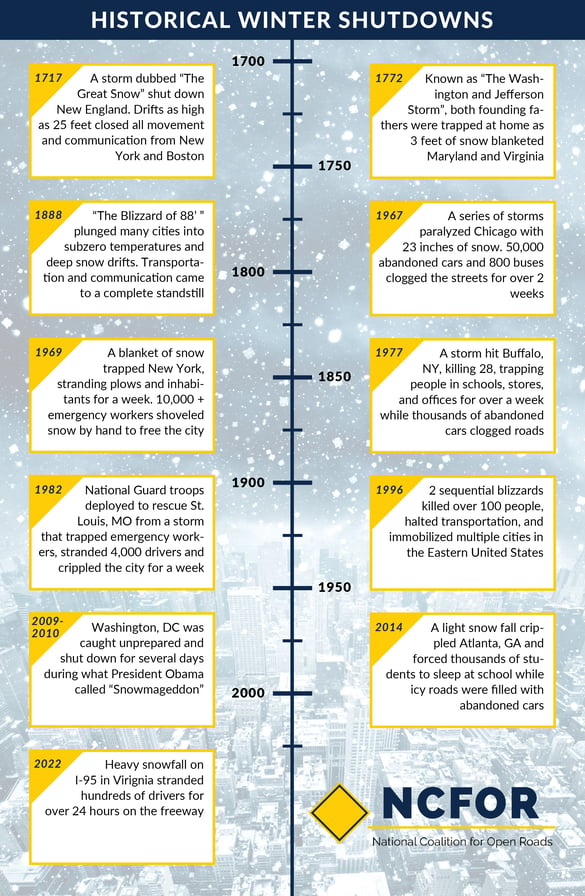 Before the mid 1800’s, municipalities had no effective snow fighting methods in their arsenal. In 1840, the first patent for a snow plow was filed, but was not put into operation until over 20 years later. In 1862, the first snow plow hit the streets of Milwaukee. Finally, the eyes of America were opened to the possibility of clear streets and functioning cities in the winter for the first time in our history.

What Are The Costs of Winter Closed Roads?

Open roads are the circulatory lifeblood of our rural communities as well as urban centers. When snow fighting crews set out to clear clogged roads, they are opening arterial pathways that keep our country running. Closed roads have far reaching effects on the health and economy of an area. 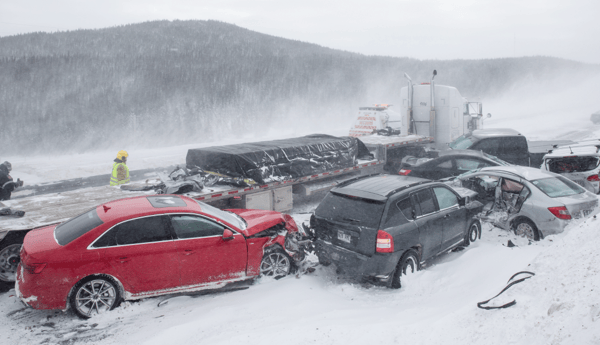 According to a 2014 study conducted by USA Today, “wintry weather accounted for 40% of pileups.” These roadway crashes are costly for many reasons:

In the same study, USA Today reported that:

“the average roadway fatality costs about $1.32 million in associated economic costs and the average crash with a critically injured survivor costs about $1.5 million, based on a 2002 National Highway Traffic Safety Administration calculation adjusted for today's dollars.”

The Western Transportation Institute (WTI), operating out of Montana State University, has conducted many thorough studies into the economics of winter shutdowns. They have found that “the common winter maintenance practice of deicing has been shown to reduce crash frequency by 88.3 percent, and to decrease the average cost of each crash by 10 percent.”

Storms don’t just affect the localized area where snow falls. Our country’s vast commercial shipping network consists of interconnected hubs. Icy shutdowns in one city adversely impact many other cities as goods and services are immobilized.

The Federal Highway Administration found that:

“Each year trucking companies or CVOs lose an estimated 32.6 billion vehicle hours due to weather-related congestion in 281 of the nation's metropolitan areas. Nearly 12 percent of total estimated truck delay is due to weather in the 20 cities with the greatest volume of truck traffic. The estimated cost of weather-related delay to trucking companies ranges from 2.2 billion dollars to 3.5 billion dollars annually.”

2020 has taught us how costly it can be for local, national, and global economies when its workers are prevented from working. We have also witnessed how the lower to middle class bears the greatest hardship during adverse times. That means, of all the economic groups, hourly workers suffer the most during snow-related shutdowns.

WTI has reported that hourly workers account for “almost two-thirds of direct economic losses” during a snow-related shutdown. WTI also cited that:

“approximately “$1.4 billion dollars would be lost in wages alone if all of the snowbelt states were immobilized for just one day due to a winter weather event. Since then that number has climbed closer to $2.6 billion according to IHS Global Insight (Booz Allen Hamilton, 1999; IHS Global Insight, 2014).”

Not only do impassable roads prevent the populace from working, they prevent spending as well. In the same study mentioned above, WTI stated that “the one day loss of retail sales was found to be $870 million (IHS Global Insight, 2014).” The combined impact of loss of work hours plus loss of retail sales would be devastating:

“When looking into the number of dollars lost as a full economic impact at a federal, state, local and individual level the numbers are even more staggering at around $3.9 billion (Booz Allen Hamilton, 1999).”

There are tremendous safety and economic benefits associated with winter road maintenance. Some states and municipalities may hesitate when presented with upfront costs for snow plows, a snow fighting workforce, and deicing materials. However, ice prevention and timely snow removal has significant short-term and long term payoffs. The costs of snow-related road closures far exceeds the costs of proper winter road maintenance.

The National Coalition for Open Roads (NCFOR) knows that open roads improve welfare, contribute to economic growth, and keep the life blood of our communities flowing. NCFOR works with the general public and officials at the local, state, and federal level to educate and encourage best practice solutions to keep roads open during the winter.

Ice Slicer® is proud of our partnership with NCFOR to more quickly restore winter roads to safe and driveable conditions. We have teamed up with states and cities in and out of the snowbelt to reduce accident rates and keep roads open. Click here to learn more about how Ice Slicer's® natural benefits continue to help areas across the country.

Just as each snowstorm presents a unique set of challenges, open road practices will vary by municipality. Some of these best practices include:

Policy makers will need to conduct cost benefit analyses that balance their needs, weather concerns, and budgets. Luckily, educational resources are available for these endeavors. Contact NCFOR at Info@NCFOR.us or reference WTI’s cost benefit analysis guide. Let’s work together as a team to continue fueling America’s fascination with the “open road” and improve the winter safety and health of our communities.