Substances used on crops, gardens, homes, runways, and road surfaces, unfortunately find their way into the natural environment to some extent. There are many ways to measure and track the effects of deicers on the environment. Learning more about how certain substances can affect the environment helps us select the right products and use them more responsibly. Here, we will learn more about how deicing products can impact a reading called biochemical oxygen demand.

What is Dissolved Oxygen?

First we need to start off with learning about dissolved oxygen. Dissolved oxygen (DO) is the measure of how much O2 is dissolved within a body of water. This oxygen allows aquatic organisms like fish and zooplankton to respirate and breathe. Oxygen can enter a body of water in a few different ways: through photosynthesizing aquatic plants, diffusion at the surface, and aeration from flowing and churning water.

There are a few other variables that affect how much DO is contained within a body of water. Faster currents, cooler water temperatures, and lower levels of organic matter all increase DO levels.

On the opposite side of the spectrum, stagnant, warm water, with high levels of rotting organic material contain low levels of DO. Under these conditions, bodies of water can become eutrophic (nutrient rich and oxygen depleted), form toxic algae blooms, grow noxious bacterial slimes, and kill off large quantities of aquatic life.

What is Biochemical Oxygen Demand (BOD)?

So how do environmental scientists know when a body of water is changing from aerobic (oxygen rich) to eutrophic? They measure and track what is known as biochemical oxygen demand.

Water health can deteriorate if too many nutrients flow into the water. When organic material levels are too high, microorganisms get to work breaking down those nutrients. During this breakdown, microorganisms also consume dissolved oxygen in the water.

How is BOD Measured?

BOD is measured in milligrams of oxygen consumed per liter of water. Scientists take water samples and incubate them for 5 days at 68° F/20° C. It is usually measured alongside chemical oxygen demand (COD) which measures the amount of organic compounds in the water. 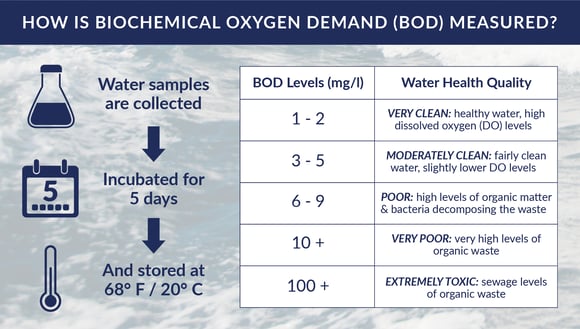 According to NOAA “Sixty-five percent of the estuaries and coastal waters in the contiguous U.S. that have been studied by researchers are moderately to severely degraded by excessive nutrient inputs.” These dead zones have been appearing in the news more frequently in recent years, and they can form under both natural and human-induced stresses.

How Do Deicers Affect BOD?

Deicers can contain a few different compounds to lower the freezing temperature of water. The most common deicing compounds are:

Let’s look at each of these categories and their effect on biochemical oxygen levels.

Chlorides are the most common type of deicing compound used today. They are used in both solid granular and liquid form. According to a government deicing impact study conducted by the Idaho Transportation Department:

Acetates, such as calcium magnesium acetate, have organic molecules that can be used by microorganisms as nutrients. The United States Geological Survey (USGS) states:

“the adverse environmental effects of CMA used as an anti-icing material are mainly related to the acetate ion, C2H3O2. Acetate can increase the biochemical oxygen demand (BOD) of streams, causing the depletion of dissolved oxygen.”

Glycol solutions are most commonly used to deice aircraft. Since glycol is a sugary alcohol, you can imagine the harmful microbial feast it triggers when it reaches waterways. The Federal Aviation Agency (FAA) has admitted that:

Because of these risks, the FAA has been conducting lab and field tests in bioremediation to reduce these effects “using various combinations of inocula (bacteria), nutrient mixes, enzyme mixes, and ultrasonic stimulation.”

Agricultural byproducts from beets and corn can be fermented and used as deicing compounds. These compounds are sometimes added to other deicers as corrosion inhibitors to reduce levels of corrosion on infrastructure. These byproducts have been shown to help vegetation along the roadside but are also extremely detrimental to waterways and aquatic life. The Michigan Department of Environmental Quality has been studying the effects of agricultural byproduct deicers on their many lakes and slow flow streams. They found that:

“de-icing products derived from ABPs have the potential to adversely affect water quality if allowed to enter surface waters. These products often contain high levels of organic materials which exert a high biochemical oxygen demand (BOD) when broken down by microorganisms in an aquatic environment. This results in reduced in-stream levels of dissolved oxygen (DO), which is necessary for the survival of aquatic life. Fish kills, impaired biological communities, and noxious growths of bacterial slimes can result from elevated BOD and reduced levels of DO in streams and lakes.

Some ABP deicers have the potential to greatly impact DO concentrations in surface waters, as they may contain many times the amount of BOD found in strong wastes like raw sewage.”

The study mentioned earlier, conducted by the State of Idaho found that:

They also noted that:

“agricultural byproducts patented for use as roadway deicing and anti-icing agents, including the liquid residue of fermented corn byproducts...has been shown to cause ‘eutrophication of water, which will result in the proliferation of noxious aquatic plants, especially blue green algae,’ reducing water oxygen levels.”

So how do we balance the need to restore road safety during the winter with protecting our precious waterways? Well, we are proud to say Ice Slicer granular deicer is the answer. Mined from a subterranean, Jurassic Period, salt deposit in Utah, Ice Slicer is naturally high-performing without the need for harmful additives. Our products do not contain any acetates, glycols, or agricultural byproducts that lead to detrimental biochemical oxygen demand in our waterways. Ice Slicer is a naturally powerful and environmentally friendly alternative to the more destructive deicers and salts on the market.