What Is Leaching From Your Deicer?

Most of us have enjoyed the satisfaction of throwing down deicing salt and watching it liquify and cut through ice and snow. But what is really happening down there? What is leaching out of your deicing product as it turns into brine? Let’s take a closer look at the physical and chemical process of leaching.

What Is Leaching From Your Deicer?

Leaching is when a solute (dissolved substance) is extracted from its carrier by a solvent (dissolver). The physical and chemical process of leaching is happening all around us constantly. This movement of minerals is an extremely important force that affects the health of our soil and watershed, and results in some of nature’s most beautiful formations. 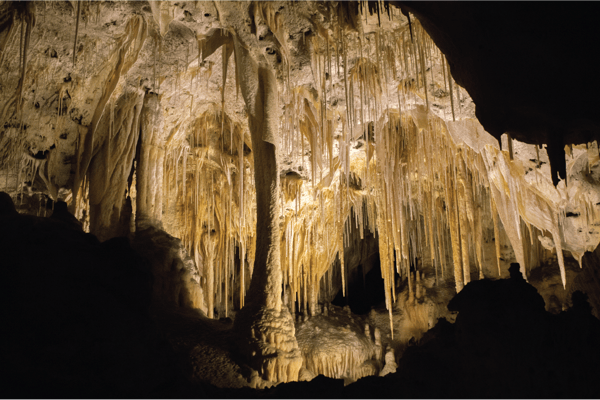 One of the best examples of leaching is visible in just about every cave on the planet, like the Carlsbad Caverns in New Mexico (pictured above). The stunning  formations in these caves are caused by water (solvent) percolating through rock (carrier) and picking up minerals (solutes) along the way. This percolating water slowly leaches and deposits minerals as it drips downward and forms stalactites, stalagmites, and columns.

The speed and amount of solute extracted depend upon a number of factors:

Now that we understand the basic process of leaching, we can examine this process at work in your deicing product. Granular deicers leach out solutes when they come in contact with water (in icy or liquid form). The primary solutes leaching out of a deicer are chlorides.

In excess levels, leaching chlorides can have negative effects on the environment. Highly saturated chlorides bind with soil particles and prevent plants from absorbing nutrients and water.

According to a study conducted at Rutgers University “when the concentration of both the sodium and chloride components of salt in the root zone is excessive, plants preferentially absorb these ions instead of nutrients such as potassium and phosphorus.  When this occurs, plants may suffer from potassium and phosphorus deficiency.”

In addition, the USDA has found that high levels of leaching “sodium ions can effectively strip the soil of several macronutrient (calcium, magnesium, potassium, and ammonium) or micronutrient (copper, zinc, or manganese) cations that are required for plant growth.”

The physical and chemical composition of your deicer will determine what substances are leaching out of it. Let’s conduct a leaching comparison between typical white road salt and Ice Slicer. 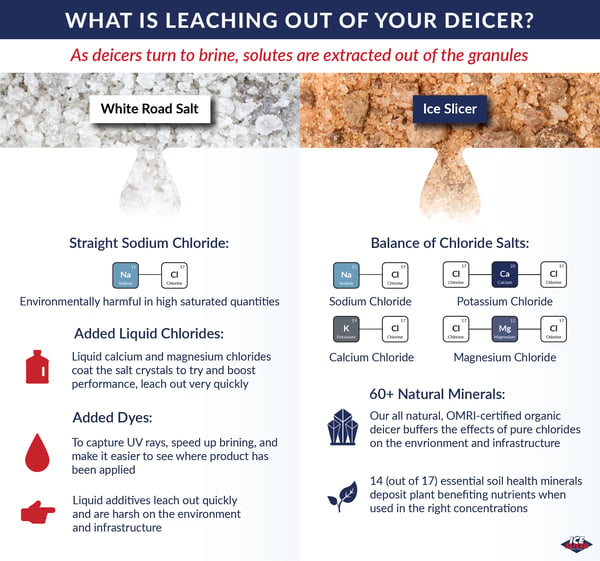 Click here to learn more from EnviroTech Services about the difference between white salt and Ice Slicer.

White road salt typically consists of sodium chloride, which only lowers water’s freezing point to about 21°F. To boost performance, some white road salt manufacturers coat their granules with other liquid chlorides like magnesium chloride (lowers to around 5° F) or calcium chloride (around -25°F). These liquid additives leach out very easily, causing the product to harden and reduce its storage shelf life. 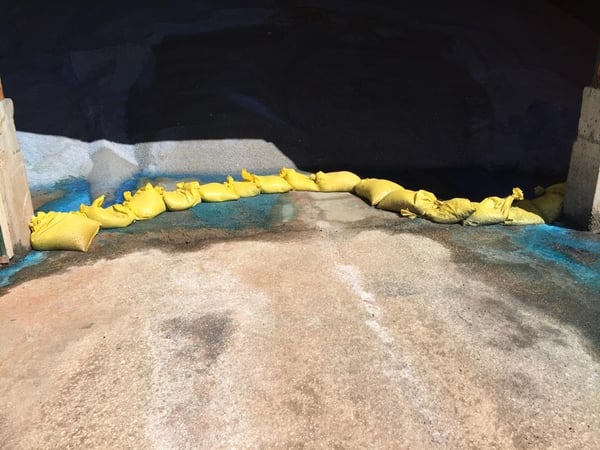 Pictured above is an example of how uncontrollably liquid chlorides and dyes leach out of white road salt.

When liquid additives are combined with solid salt crystals, they just coat those crystals instead of permeating them. Like a rapid release dissolving pill capsule, these additives quickly leach out of white road salt and their performance effects do not last long.

Dyes are another common white salt additive. These dyes are added to help capture UV rays from the sun and make it easier to see where you have applied salt. Unfortunately, these added dyes stain and damage concrete and can also harm the environment. According to the EPA, substances found in dyes can bio-accumulate and “dyes tend to absorb ultraviolet radiation and have the potential to form decay products more toxic than the original parent dye compound.”

Ice Slicer also contains over 60 natural minerals that are homogeneously blended throughout the granules. These minerals leach out with the chloride salts and act as an environmental and infrastructural buffer. Instead of stripping fertility from the soil, Ice Slicer leaches minerals that can enhance soil fertility.

Among these minerals, are 14 out of 17 essential minerals that soil needs in order to encourage plant growth. In the right concentrations, Ice Slicer is extremely beneficial to plant growth along the roads where it is applied.