Whether you live in the snow belt, visit high altitudes, or have ever traveled during a snowstorm, we can all agree on 1 thing...1 of the most comforting sights in the world is the sight of snow plows and deicing trucks making the roads safe for all of us. Let’s explore how snow fighters keep us safe all winter long. 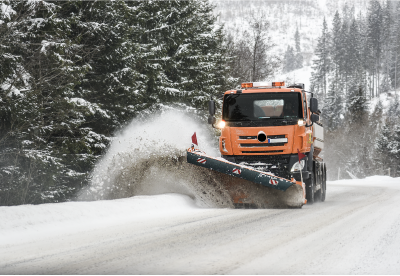 My husband and I moved from Southern California to Northern Utah on New Year’s Eve; him driving our moving truck, and me driving our car while 6 months pregnant. We were so unprepared for the abrupt climate change that we didn’t even have sub-freezing washer fluid in the vehicles we were driving. 2 hours from our destination, we hit a sudden and blinding blizzard on the freeway. I completely lost sight of my husband in the moving truck, any cars around me, lane markings, or even the side of the road. I knew stopping anywhere would be incredibly dangerous so I crept along for several minutes, in a state of panic. 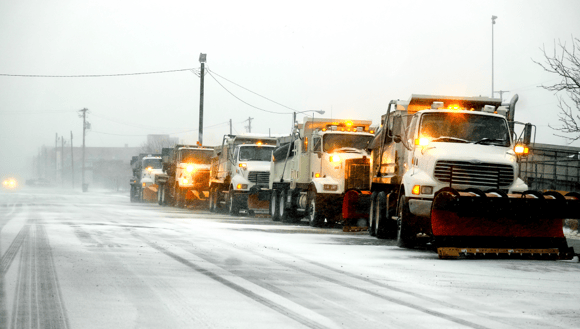 After a few minutes, I saw the most relieving sight...the flashing lights of a snow fighter truck in front of me. I followed those lights in its freshly plowed path at a safe distance, unsure of where they were leading, but knowing this was the safest place to be. That truck was the only thing in the world I could see beyond my windshield. The snow fighter took the next freeway exit so I followed it along the freeway off ramp and ended up at the exact gas station my husband had managed to find safely as well. My family owes our lives to the very timely arrival of that snow fighter.

Snow fighting methods may vary by region, but the end goal is the same: restore winter road safety. According to the Department of Transportation (Federal Highway Administration) there are an average of 1,235,145 weather related crashes on US roads every year. These crashes result in an average of 418,005 persons injured and 5,376 persons killed. 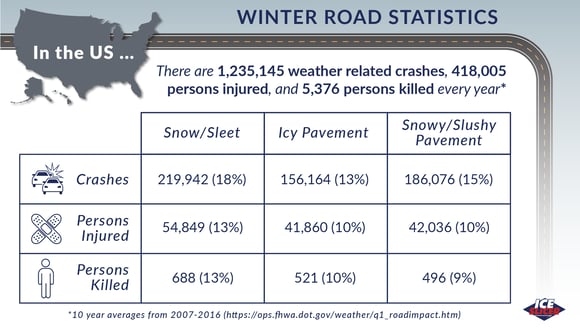 The FHA further separates these statistics into categories based snow, sleet, and the presence of ice, snow, and slush on the pavement:

Every year, armies of snow fighters deploy city by city to reduce these statistics, save lives, and return our roads to safe, drive-able conditions as quickly as possible.

Every winter, snow fighters need to be ready to tackle sudden and unrelenting snow and ice accumulation, day and night. According to the Snow Fighter’s Handbook: “The modern snow fighter must be accountable for meeting the community’s needs for safety and mobility.” Snow fighters meet this level of accountability in many ways.

Mother nature doesn’t always give us a heads up, so snow fighters never plan around average conditions. They are ready for the heaviest of winter conditions year after year. Their “off season” is more accurately a preparation season. During this time, they acquire and store deicing materials, calibrate equipment, complete training, repair and tune vehicles, and draw up plans of action.

As we drive to work and school or run errands, we may not notice the careful coordination of snow fighting efforts. Snow fighters perform snow and ice control based upon pre-established routes organized by local priorities. Their first priority is always an arterial network that opens a minimum transportation path for police, fire, and other emergency units. From there, snow fighters work in descending order of urgency for their local roads to provide safe access to stores, schools, office buildings, residences, etc.

Stay Up To Date

Snow fighters stay current on developments that can aid them in their fight for winter road safety. They accomplish this by researching and applying new deicing products, equipment, application practices, road priority strategies, and weather tracking tools.

Jack Frost does not care about peoples’ need for rest, breaks, days off, or vacation. Snow fighters are ready to work 24 hours a day, 7 days a week. They work non-stop during winter storms and operate within a strict time table to ensure roads are cleared as quickly and efficiently as possible.  It is not uncommon for these snow fighters to miss important holidays such as Thanksgiving and Christmas to make sure that the rest of us arrive safely to the warm homes of those we love.

Snow fighters don’t have the luxury of looking out the front window at a winter storm and thinking “I don’t want to drive in that, I will just stay home today.” Just as firefighters willingly enter a burning building to keep people safe, snow fighters willingly work in frigid and hazardous conditions all winter long to keep us safe.

Even when a winter storm has passed, snow fighters keep busy monitoring weather patterns and our roadways to eliminate ice accumulation. In addition, some roads need multiple passes in order to keep them open and safe for the travelling public.