Ice Slicer Is A Redmond Product

Ice Slicer's nature made formula has a fascinating history and legacy of high performance. Here, we will learn about where Ice Slicer comes from and other products that are harvested from the same rich mineral deposit. 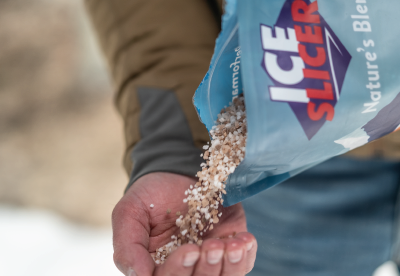 Ice Slicer Is A Redmond Product

Ice Slicer is harvested directly from a unique geological deposit in Redmond Utah. Let's take a closer look at what makes this region so special.

The Redmond Mineral Deposit and Mine

Redmond’s story actually begins over 200 million years ago...in the Jurassic Era. An ancient sea covered modern day Utah and a rich deposit of deep sea minerals began to form. Over time, a volcanic explosion covered this ancient sea bed with ash. As the eons passed, this ash layer aged to become a protective bentonite clay cap over the hardened sea minerals below.

Fast forward to 1958, when a regional drought hit central Utah. The Bosshardt brothers, Milo and Lamar, were pressured to abandon their farm and search for new pursuits. They knew Native Americans had once harvested salt from the area, so they borrowed some money and went into the salt business with little more than sledgehammers, picks, and a drive to provide for their families.

The Redmond Mine Today

Today, Redmond’s rich deposit serves as the foundation for a wide family of all natural Redmond products, enjoyed by many different industries. Our mine, offices, and all other facilities use approximately 2.5 million kWh of electricity each year. And we are happy to announce that 99% of our usage is solar powered!

Products From The Redmond Mine

The minerals and clay from Redmond's deposit are extremely versatile and their uses continue to expand.

Redmond's all  natural clay and minerals are available in the following product families:

Ice Slicer is proud to be a member of the Redmond family of products, and to improve road safety with nature's perfect recipe for melting ice and snow. The Earth has naturally provided Ice Slicer with every advantage to become the safest and highest performing deicing salt available.

Ice Slicer contains a balanced mix of complex chloride salts (sodium, magnesium, potassium, and calcium) that white salt just can’t match on its own. And with over 60 trace minerals evenly distributed in each granule, its mineral buffers efficiently protect infrastructure and the environment.