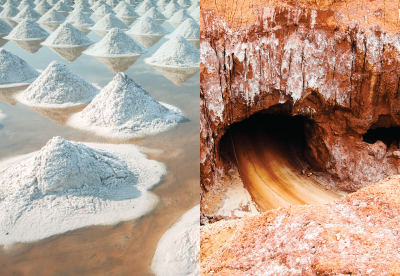 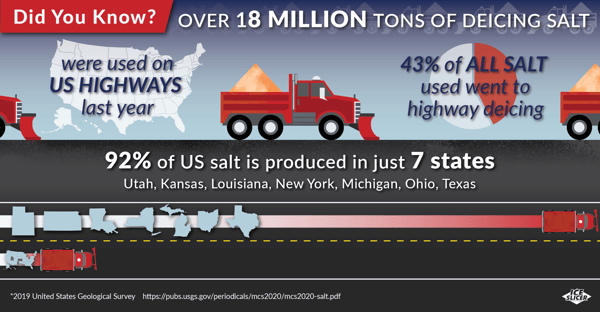 The USGS also reported that 92% of the salt in the United States is produced in just 7 states: Utah, Kansas, Louisiana, New York, Michigan, Ohio, and Texas. These areas’ harvesting methods depend upon their natural resources and their climate. The 3 main methods of salt production and harvesting are: evaporation (solar and mechanical), solution mining, and traditional mining.

Evaporative salt harvesting starts with salt water or brine. Using either solar or mechanical heat, the water is evaporated away, leaving the salt behind where it is harvested and processed depending upon how it will be used.

In places with low annual rainfall, using the power of the sun is an energy efficient evaporation method. Brine is collected in shallow pools where water slowly evaporates, typically over several months. This evaporation leaves behind sodium (Na) and chlorine (Cl) which bond together to form sodium chloride (NaCl) or halite salt.

Solar evaporation typically leaves behind nearly 100% pure sodium chloride rock salt crystals. The salt is then usually harvested by machinery, however in some areas it is still completed by hand. These pools are formed along ocean coastlines, salt lake beds, or springs with access to natural salt water. Other solar operations pump their brine solution up from a subterranean salt mine (see solution mining below).

In a mechanical or vacuum pan operation, heating equipment is used to evaporate the water instead of the sun. Large pans of brine solution are mechanically heated until the brine boils away the water and only a layer of salt remains in the pan. Here, the final product is typically flake shaped sodium chloride instead of cubic or rough crystals.

In solution mining, a well is built over a salt deposit in the earth. Water from this well is injected into the deposit where the salt leaches into the water, and dissolves into a brine (click here to learn more about leaching). This brine is then pumped into either vacuum pans or out into solar pools (again only in low rainfall areas) for evaporation.

Salt deposits in the ground are typically the remains of ancient sea beds. These sea beds become covered with earth, either by tectonic changes or volcanic activity. Mining operations can use a variety of methods to bring this salt to the surface: drilling bores, cutting and blasting, conveyor belts and other machinery. Through this process, most salt mines develop carefully constructed tunnels and rooms that create an interesting subterranean network.

Mined salt contains trace minerals from its ancient environment which affect its coloring. Mined mineral salt will have a unique composition and color created by its region’s local geology, for example: pink Himalayan salt mined in Pakistan, and reddish orange salt mined in Utah.

Once salt is collected, salt producers use a range of methods to prepare and process their products. This process will look different depending upon how the salt is going to be used. For example, table salt is usually ground, refined, and additives like iodine and anti-clumping agents are introduced. Let’s take a look at the post-harvest processes for deicing salt.

Mineral deicing salt contains the chlorides needed to lower water’s freezing temperature, but also the natural trace minerals of its environment. But, why do these minerals matter?

The natural coloring of mineral deicing salt eliminates the need for added dyes that can bioaccumulate in the environment and stain concrete. Darker mineral salt absorbs UV rays better than white salt and produces brine more efficiently. Its signature color also makes it easier to see where you have applied it so you don’t overuse your deicing product.

As mineral deicing salt melts ice and dissolves into brine, its ingredients begin to leach out. As the chloride salts leach out, so do the naturally occurring minerals, These minerals act as a beneficial buffer that protect concrete, metal, soil, and plants from the effects of the chlorides.

During the Jurassic Era, in modern day central Utah, volcanic ash covered an ancient sea bed. Over the next 200 million years, that volcanic ash aged to become a protective bentonite clay layer over the hardened sea salt below. The unique geology of the area has created an ancient, rich, mineral sea salt deposit that has been protected from contaminants by the bentonite clay above. Then in 1958, a regional drought pressured the Bosshardt brothers, Milo and Lamar, to abandon their Utah farm in search of new pursuits. They knew Native Americans had once harvested salt rock from the area, so they borrowed a little money and went into the salt business with little more than sledgehammers, picks, and a determination to provide for their families.

The Earth has naturally provided Ice Slicer with every advantage to become the safest and highest performing deicing salt available. Ice Slicer contains a balanced mix of the chloride salts (sodium, magnesium, potassium, and calcium) that white salt just can’t match on its own. And with over 60 trace minerals evenly distributed in each granule, its mineral buffers efficiently protect infrastructure and the environment.