In most industries, friction is the enemy. Time, money, and effort are spent smoothing, lubricating, and streamlining, all in the name of reducing friction. However, when it comes to road maintenance, friction is our live-saving ally. Let’s take a closer look at friction, how it is measured and tested, and how to restore pavement friction during the winter. 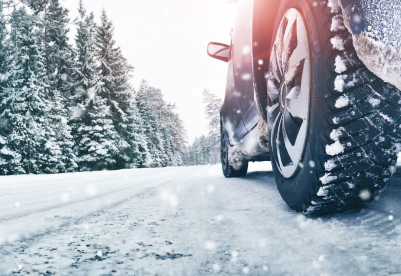 There are many factors that affect how much friction is generated between adjoining objects, such as: the level of surface contact, texture of the objects, presence of liquids, ambient temperatures, and more.

During normal driving conditions, a car experiences a specific kind of friction (called traction) between its tires and the road surface. That friction helps your car grip to the road and provides you with maneuverability and control. Unfortunately, winter deposits of ice and snow greatly reduce friction on road pavement surfaces, creating extremely hazardous driving conditions.

There are many variables that affect overall pavement friction, including: quality of the pavement surface, the road environment, properties of the tires, and how vehicles operate on the road. 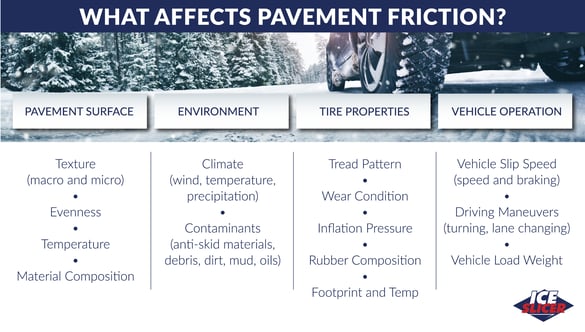 How Is Friction Measured?

For decades, the road maintenance industry has conducted laboratory tests on pavement friction solutions. In 1992, the Strategic Highway Research Program (SHRP) sponsored the creation of a handbook for how to test deicing products and evaluate how effectively they penetrate and undercut ice, melt into a brine, and increase pavement friction. These SHRP tests were solely conducted in a strict laboratory setting as researchers studied petri-dishes of deicing solutions.

Over the years, traditional SHRP tests have been repeatedly modified to try and mimic variables that would occur out in the field. Since 2010, the Western Transportation Institute (WTI) in Montana has elevated lab testing quality with the use of an environmental chamber. In this chamber, paved road samples are treated with deicers and then subjected to a wide range of environmental changes. Ice Slicer is proud to be partners with Montana State in these friction testing advancements. We are dedicated to working together with the WTI to lift and innovate new friction testing practices that more closely represent real life conditions.

Lab tests are generally inexpensive and easy to replicate, but should only represent part of friction testing as a whole.

Typical lab friction testing is only able to replicate a few stable environmental factors to measure their effects on pavement friction. These factors include:

According to WTI, “laboratory tests are often used to evaluate deicer performance, but results have been shown to poorly correlate with field performance.” WTI recommends that laboratory friction testing should only be the initial step in evaluating deicer performance. After lab testing, deicers should be taken out to the roads for field friction testing. In field conditions, researchers can observe and measure a wide range of additional variables that are very difficult to re-create in a lab. Field friction test variables include:

Mobile friction testing vehicles resemble a multi-wheeled trailer that is towed behind another vehicle. You may have seen similar devices being towed up and down the airport tarmac during inclement weather. These devices measure: stopping distance, fixed/angled/variable slip, acceleration and deceleration rates, and more. They can run over multiple stretches of pavement and collect data for easy comparison and analysis.

Some municipalities install optical sensors along roadways that use laser technology to measure and analyze surface conditions. These fixtures use sensors to measure and calculate the coefficient of friction and precipitation layer thickness in real time.


Get A Quote Today